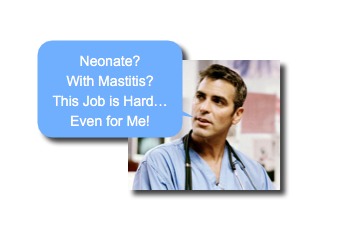 We have previously discussed my distrust of neonates (ALTE, BRUE) and this may be why so many of the Morsels focus on neonatal issues. Recently a dear friend, colleague, and full-time appreciator of UMMS Shock Trauma Pink Scrubs, Dr. Jessica Baxley brought up the topic of Mastitis in a Neonate! Is this another topic like Neonatal Conjunctivitis (something that seems simple, but is made complex by the fact it is in a neonate) or is it straight forward? Let us take a minute to review Neonatal Mastitis:

Neonatal breast hypertrophy is a common phenomenon in term infants, superadded infection can lead to mastitis and that can progress to breast abscess with short and long term detrimental effects. Our effort is to study the prevalence, risk factors, the current microbial profile and sensitivity pattern in these infections in order to suggest an optimal treatment plan for these patients. […]

To document the range of presentations, extent of investigations, and treatment choices of ‘physicians treating’ neonates with mastitis seen over a 9-year period at a tertiary care pediatric hospital. […]

Neonatal mastitis and neonatal breast abscess are uncommon. Although well described in the pediatric and surgical literature, there is a paucity of reports describing their sonographic features. […]

Twenty-two cases of mastitis were evaluated between 1995 and 2003. Nine of the children were younger than 2 months of age, and 12 were older than 8 years of age. Girls accounted for 82% of the cases. Seven of the infections were true abscesses. Pathogens included Staphylococcus aureus in 5, Gram-negative bacilli in 3, group A Streptococcus in 1 and enterococcus in 1. These data suggest that mastitis in children occurs in 2 distinct age groups, ne […]

Neonatal mastitis is an uncommon infection. Twenty-one neonates with mastitis were treated at the Bnai Zion Medical Center and Hillel Yaffe Hospital during the years 1985-92. Half of them presented with mastitis, and the other half with breast abscess. The most common pathogen was Staphylococcus aureus, which was isolated in 85% of cases. Antibiotic therapy was the initial treatment in all cases except one, and included i.v. orbenin or augmentin. […]

Eleven cases of neonatal mastitis diagnosed at National Taipei College of Nursing Health Center, since 1983, have been reviewed by chart retrospectively. All 11 cases occurred in full-term infants 1-4 weeks postnatally. Female predominated with male: female ratio of 1: 1.75. The mastitis of these cases were confined to unilateral side and did not spread systemically. Gram stain smear of the purulent material got from aspiration, incision or spont […]