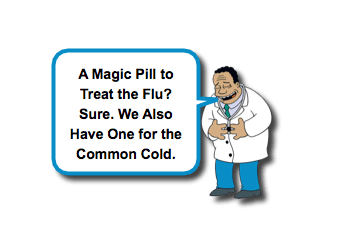 Making a patient feel better is empowering and rejuvenates our professional spirits. This is why we all love taking care of the patient with a Patellar Dislocation, Shoulder Dislocation, or a Nursemaid’s elbow. Obviously, administering Adenosine for SVT can make you feel like a magician also! Unfortunately, the availability of Magic Medicine is limited. Even more unfortunate, our patients are often preconditioned to look for a magic pill. This flu season has been challenging, on multiple fronts, because patients have been told of the importance of Oseltamivir (Tamiflu). I, personally, however, have not seen a magic pill in our clinical environments. When something seems to be incongruent, I look to see what the Cochrane Library has to say. Let us review what is known about oseltamivir today (and actually since 2014):

Oseltamivir and Neuraminidase Inhibitors: The Problem

Oseltamivir: What is Concluded

Oseltamivir (Tamiflu), a neuraminidase inhibitor, was approved for seasonal flu by US Food and Drug Administration in 1999. A number of randomized controlled trials, systematic reviews, and meta-analysis emphasized a favorable efficacy and safety profile. Majority of them were funded by Roche, which also first marketed and promoted this drug. In 2005 and 2009, the looming fear of pandemic flu led to recommendation by prominent regulatory bodies s […]

Neuraminidase inhibitors (NIs) are stockpiled and recommended by public health agencies for treating and preventing seasonal and pandemic influenza. They are used clinically worldwide. […]