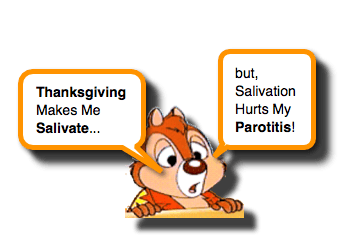 Caring for children in the ED can be challenging for certain.  Managing the critically ill child requires a lot of skill and action (ex, Can’t Intubate, Can’t Ventilate and Hypercyanotic Spell).  Remaining vigilant for the subtly sick takes a lot of energy and contemplation (ex, Subtle Signs of Heart Failure, Osteosarcoma, and Inborn Errors in the ED).  While these two groups make our job challenging, often I find the relatively “simple” conditions to be surprisingly challenging;  they can generate a number of questions that perhaps I wasn’t ready to answer.  As many of us (in the USA anyway) salivate over our Thanksgiving meals, let us consider the “seemingly simple” condition of Sialadenitis and Parotitis.

To determine the effectiveness and safety of sialendoscopy for the treatment of juvenile recurrent parotitis (JRP). The study was conducted and reported in accordance with the Preferred Reporting Items for Systematic Reviews and Meta-Analyses guidelines. […]

Sialadenitis in the pediatric population accounts for up to 10% of all salivary gland disease. Viral parotitis and juvenile recurrent parotitis are the two most common causes. Multiple factors, independently or in combination, can result in acute, chronic, or recurrent acute salivary gland inflammation. Sialendoscopy has emerged as the leading diagnostic technique and intervention for pediatric sialadenitis. Sialendoscopy is a safe and effective […]

The differential diagnosis of bilateral parotid gland enlargement in children includes infectious, inflammatory, and neoplastic disorders. We present the case of a 13-year-old male who presented with a 5-week history of bilateral parotid swelling. On exam, both parotid glands were nontender, smooth, and diffusely enlarged. He had slightly elevated inflammatory markers, but other lab results were normal. A neck CT revealed symmetric enlargement of […]

Parotitis is a common condition seen in the pediatric population, usually as an isolated occurrence associated with viral or bacterial infection. The differential diagnosis expands when recurrent parotitis is encountered. One etiology is primary pediatric Sjögren syndrome (SS), an autoimmune condition typically associated with dryness of the eyes and mouth in adults. Pediatric patients often present with isolated recurrent bilateral parotitis, h […]

The incidence of salivary gland infections in the pediatric population is low but not infrequently seen in pediatric oral and maxillofacial surgery practices and hospital environs. With an ever increasing armamentarium of diagnostic tools and medical and surgical therapies, these patients can be managed successfully with minimum morbidity and decreased incidence of recurrences. […]

Parotitis is a well recognized entity in the adult population, however there are very few studies concerning the clinical presentation and management of this condition in children. […]

To evaluate the incidence, types, and treatment outcomes of pediatric parotid lesions. […]