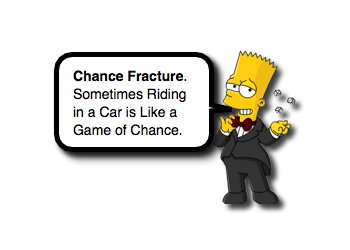 We have discussed the potential hazards of being a child on numerous occasions (ex, Injury Prevention, Trampolines, Lawn Mowers, Submersions, Electricity, Firearms), but nothing leads to more injuries than motor vehicles (sometimes, even when they are standing still – Vehicle Hyperthermia). Certainly, the use of a seat belt can save a life; however, if positioned incorrectly, it can also lead to injury. Let us review one such injury- the Pediatric Chance Fracture:

The pediatric Chance fracture (PCF) is an uncommon injury, but it has been increasingly reported. Knowledge is limited to few case reports and short series. To understand the various aspects of this injury, the authors reviewed the current literature. […]

Chance fractures or flexion-distraction injuries of the spine are uncommon in children. Previous reports have been limited to isolated case reports or very small retrospective series. This is the largest series reported in the English literature. […]