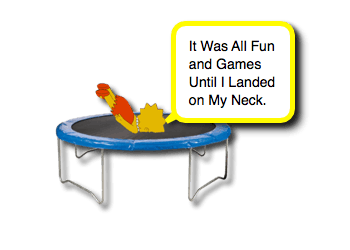 Life is full of dangers, everywhere we go, and the house is certainly not a complete sanctuary. In fact, the home can be quite hazardous (ex, Detergent Pods, Liquid Nicotine, Electricity, Firearms, and Lawn Mowers). While some of these items are obviously dangerous and should be avoided, there are other items that are meant to be fun, like the pool, that can turn out to be common sources of pain and suffering.  One such item (and my all time least favorite neighborhood “toy”) is the trampoline. Let’s take a minute to review Trampoline Injuries:

The aim of this study was to report a case of a 4-year-old boy who had been playing on the trampoline and presented to the emergency department (ED) with vomiting and ataxia, and had a vertebral artery dissection with subsequent posterior circulation infarcts. […]

To investigate inflatable bouncer-related injuries to children in the United States. […]

Despite previous recommendations from the American Academy of Pediatrics discouraging home use of trampolines, recreational use of trampolines in the home setting continues to be a popular activity among children and adolescents. This policy statement is an update to previous statements, reflecting the current literature on prevalence, patterns, and mechanisms of trampoline-related injuries. Most trampoline injuries occur with multiple simultaneo […]

Trampoline injuries represent a preventable cause of injury in children. This study identified the characteristics of children injured while using trampolines who presented to a pediatric trauma center in Sydney, Australia. […]