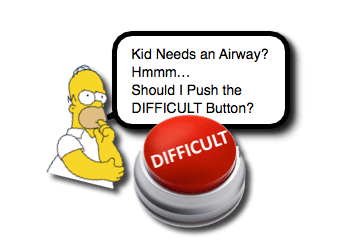 Respiratory illness, sepsis, and trauma are three important entities afflicting children that may lead to needing to manage a child’s airway. Airway management in the ED is a complex interplay of patient factors, clinical illness status, and provider factors that, through our thorough training we become proficient at navigating. We have discussed many airway concepts previously (ex, ETT Depth, Cuffed ETTs, Apneic Oxygenation, Delayed Sequence Intubation, Noninvasive Ventilation, Heliox, and Transtracheal Ventilation) but one topic that deserves specific attention is the notion of a Difficult Airway:

Anatomic and physiologic differences influence how the oral, pharyngeal, and tracheal axes align as well as how the respiratory mechanics function and how the child compensates to physiologic stress.

The differences are most prominent in children < 2 years of age and more adult anatomy evolves as children progress to 8 years of age.

This module will give the anesthesia provider the information needed to identify, prepare for, and clinically manage a difficult airway in children. […]

The goal of this literature review is to provide the anesthesia practitioner with the skill set to detect and prepare for a difficult pediatric airway. The authors have reviewed and compiled information on some of the most common conditions that can predispose pediatric patients to a difficulty airway, such as macroglossia, mandibular hypoplasia, micrognathia, cervical instability, limited cervical movement, maxillary and midfacial hypoplasia, an […]

Most airway problems in children are identified in advance; however, unanticipated difficulties can arise and may result in serious complications. Training for these sporadic events can be difficult. We identified the need for a structured guideline to improve clinical decision making in the acute situation and also to provide a guide for teaching. […]