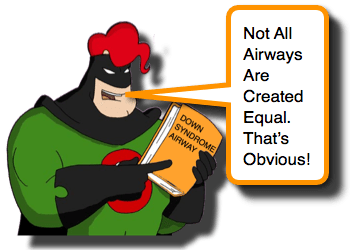 The Ped EM Morsels strive to reinforce the notion that children are not an “alien population,” and while they deserve special attention, they should not be feared by us.  Children are, rather, a unique population that requires special consideration of the differences in anatomy and physiology (ex, Sinus Bradycardia, Aortic Trauma, Back Pain, Traumatic Pneumothorax).  What is equally important to remember is that within the pediatric population as a whole, there exists other unique populations that require even further appreciation of anatomic and physiologic variances.  Children with Down Syndrome deserve such specific consideration… particularly with respect to the Down Syndrome Airway.

Down syndrome is a common chromosome disorder affecting all body systems. This creates unique physiologic concerns that can affect safety during anesthesia and surgery. Little consensus exists, however, on the best way to evaluate children with Down syndrome in preparation for surgery. We review a number of salient topics affecting these children in the perioperative period, including cervical spine instability, cardiovascular abnormalities, pulm […]

Respiratory disease is a common cause of morbidity and mortality in children with Down’s syndrome (DS). Causes range from those problems common to many children with DS, such as a narrow airway or impaired immunity, to rare structural lesions, such as tracheal bronchus. Additionally, other organ systems or extrinsic factors may play a role. A thorough understanding of the range of potential problems will aid in the evaluation and management of ch […]

Down syndrome is associated with a significant health burden, which is particularly apparent in young children who will frequently present with cardiac and respiratory problems. Respiratory presentations include problems related to structural abnormalities of the airways and lungs, glue ears, recurrent lower respiratory tract infections and obstructive sleep apnoea. These conditions are readily identifiable and able to be treated. An awareness of […]

Craniofacial and cardiac anomalies of Down syndrome (DS; trisomy 21) would seem to place these patients at higher risk of anesthesia-related complications (ARCs), but to date no comprehensive large-scale study has quantified this risk. […]

To document the causes of upper airway obstruction in a population of children with Down syndrome and to highlight the role of associated comorbidities. […]

The possibility of subglottic stenosis in children with Down syndrome is well recognized. Nevertheless, this anomaly and its effect on laryngeal and respiratory function are frequently overlooked. When subglottic stenosis is present in a child with Down syndrome, the standard intubation technique may require modification. In these children, an endotracheal tube of a size appropriate to the patient’s age may be too tight in the subglottic area. By […]

Down’s Syndrome (Trisomy 21, T21) occurs in approximately 0.15 per cent of live births. In addition to the stigmata of the syndrome, other congenital defects are frequently found in these patients. Cardiac lesions are particularly prominent. To determine the complications associated with anaesthesia and surgery we examined the records of 100 consecutive patients (58 males, 42 females) who underwent surgery with general anaesthesia during a two ye […]