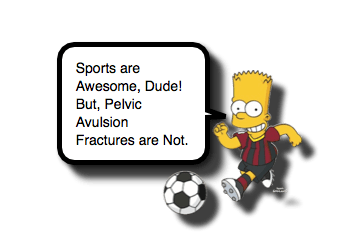 The aim of this study was to assess the patient demographics, epidemiology, mechanism of injury, and natural history of pelvic apophyseal avulsion fractures. […]

Avulsion fracture of the anterior-superior iliac spine is an uncommon injury. It is mostly seen in adolescent sprinters, distance runners and soccer players. Most cases are unilateral. We present a cohort of patients and the strategy for their treatment. […]

The patient was a 17-year-old adolescent male who was referred to a physical therapist for a chief complaint of anterior right hip pain. The physical therapist reviewed the patient’s radiographs, which had been completed and interpreted as normal prior to referral, and determined that there were radiographic signs present that may be concerning for an avulsion fracture. Further evaluation through magnetic resonance imaging confirmed the presence […]

We present a rare case of avulsion-fracture of the anterior superior iliac spine with meralgia paresthetica in a 16-year-old male basketball player. He had sensory disturbance affecting his left lateral thigh 10 days after the injury. Tinel’s sign was elicited on percussing the avulsed bony fragment of the anterior superior iliac spine. He underwent open reduction and internal fixation. The lateral femoral cutaneous nerve was noted to be entrappe […]

Fractures of the anterior superior iliac spine (ASIS) in adolescents are usually due to avulsion of the sartorius origin from the ASIS; however, the authors here report a second type due to avulsion of the tensor fascia lata origin. Eight patients were identified with ASIS avulsion fractures. Type II sartorius avulsion fracture was due to sprinting in various sports (n = 6). The fragment was smaller and displaced anteriorly. Type II tensor fascia […]

To describe the prevalence, location and sports distribution of pelvic avulsion fractures in adolescent competitive athletes. […]

Avulsion of the anterior-superior iliac spine rarely occurs in adolescents. The condition is commonly encountered in athletes. Despite the resulting caudal dislocation of the apophysis, the injury is as a rule treated by conservative means. We report on avulsion in two young athletes treated by open reduction and internal fixation, which enabled them to resume sports: one 3 weeks and the other 4 weeks after the injury. Treatment by open reduction […]