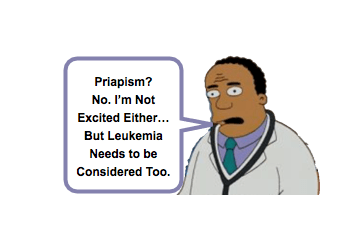 The vast majority of the time, caring for patients, particularly children, is extremely rewarding and life affirming. We are among the few who are privileged to make a true positive impact on a person’s life. There are times, however, when the specifics of an encounter can make the job less than appealing, although, important nonetheless. One specific condition that may lead to a less than enjoyable shift is priapism. Why? Well, the procedure is not one people typically thank you for doing afterwards, even if successful. In addition, like Fever of Unknown Origin, it may also lead to a tough conversation about oncologic conditions. Let’s take a minute to review Priapism in Children:

Bicycle riding has multiple beneficial cardiovascular effects; however, it is a well-documented source of significant urologic injuries. Priapism is a rare condition in children, and occurs primarily because of congenital hematologic diseases or adverse drug reactions. A pediatric clinical case and literature review of a high-flow priapism secondary to cycling trauma is described here to highlight their etiopathologic correlation. Bicycle riding […]

Neonatal priapism is uncommon and its cause is usually unknown, but it can generate anxiety for the parents and the pediatric team. The treatment in most cases is conservative and no sequelae are described. […]

To define rates of priapism diagnosis and inpatient admission among males with sickle cell disease (SCD). […]

We report the first documented case of high flow priapism after circumcision with dorsal penile nerve block. A 7-year-old male who had undergone circumcision three years before presented to our institution with a 3-year history of persistent nonpainful erections. Workup revealed a high flow priapism and, after discussion of the management options, the patient’s family elected continued observation. […]

Priapism is an adverse effect of medications used to treat psychiatric disorders. Often, this condition is self-limiting but may require urologic intervention involving aspiration and injection to induce detumescence. A case of a 15-year-old patient with priapism secondary to a long-acting stimulant is presented to describe the effectiveness of ketamine treatment for priapism. […]

With the increased application of many different drug classes for the treatment of psychiatric conditions in children, the incidence of priapism has also increased. Priapism of pharmacotherapeutic etiology in the pediatric population is a complex and poorly understood entity that continues to present new management challenges for clinicians. We present 2 cases of pediatric priapism thought to be secondary to the use of pharmacotherapeutic agents. […]

Priapism in pediatric patients is a rare entity. We present an 8-year-old boy with known cerebral palsy. He came to the emergency department with sustained painful erection for 12 hours. Physical examination showed rigid penis. Blood count and biochemical analysis were normal. Although penile Doppler ultrasound revealed normal arterial and venous flow, cavernosal blood gas was hypoxic. A total of 50 mL of dark blood was aspirated, and 2 mL of 0.0 […]

To review the association of priapism with stimulant medications and atomoxetine commonly used in the treatment of attention-deficit/hyperactivity disorder (ADHD). […]

Priapism is a rare disease. It is an emergency condition with a poor prognosis, and the risk of impotence is 50% despite appropriate management. Though about 20% cases of all priapism are related to hematological disorders, the incidence of priapism in adult leukemic patients is only about 1-5 percent. The incidence in pediatric leukemia patient is even rarer. Here we present a case of priapism in a 14-year-old apparently healthy boy who found to […]