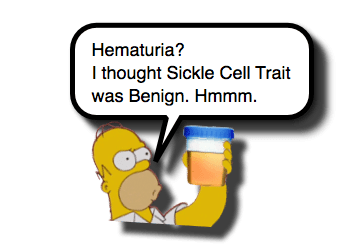 We have discussed many medical “myths” previously (ex, Atropine for RSI, Cuffed ETTs, ORT vs IVF, Morphine for Appendicitis), but recently one of my esteemed PEM Fellows enlightened me about another.  We have touched on some of the complications that must be considered with Sickle Cell Disease (ex, Splenic Sequestration, Acute Chest Syndrome, Cholelithiasis, Sepsis), but had not spent time on Sickle Cell Trait, because it is thought of as a “benign” condition.  Fortunately, Dr. JR Young taught me differently. So let us look at the complications associated with Sickle Cell Trait.

Sickle cell trait is generally considered a benign condition. However, it has been associated with uncommon comorbidities such as painless gross hematuria secondary to renal papillary necrosis and renal medullary carcinoma. […]