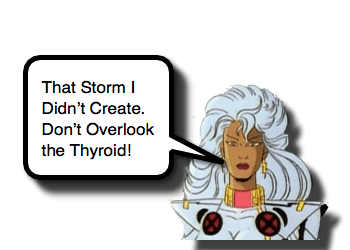 Thyroid disease is a common consideration for the ill adult patient, but not as commonly considered in children.  That being stated, we have mentioned several conditions which may be related to thyroid disease in children (ex, Bulging Fontanelle, Fever of Unknown Origin, Bradycardia, Down’s Syndrome, Hypothermia in Neonate, and Hypertensive Crisis).  So, it obviously can be a significant issue, but rather challenging to diagnosis if we don’t consider it.  This is particularly true when managing the critically ill child.  Let us now consider Thyroid Storm.

To bring to the attention of healthcare professionals the additional information on propylthiouracil (PTU)-related hepatotoxicity, based on a reanalysis of medical files reported to the Food and Drug Administration (1982-2008) for acute liver failure in PTU-treated hyperthyroid patients, and propose recommendations for the clinical use of PTU. Thirteen files of PTU-related severe liver adverse effects were analyzed for the pediatric population, s […]

Thyrotoxicosis has multiple etiologies, manifestations, and potential therapies. Appropriate treatment requires an accurate diagnosis and is influenced by coexisting medical conditions and patient preference. This article describes evidence-based clinical guidelines for the management of thyrotoxicosis that would be useful to generalist and subspeciality physicians and others providing care for patients with this condition. […]

A 2-year-old girl was found with an empty bottle of levothyroxine and blue coloring around her mouth. Forty tablets of 150-microg levothyroxine tablets were missing. Her 6-hour postingestion total thyroxine (T4) level was 68.1 microg/dL (normal range: 5-12 microg/dL), and her total triiodothyronine (T3) level was 472 ng/dL (normal range: 40-130 ng/dL). Serum levels of thyrotropin, T3, and T4 were then checked on days 3, 5, 7, and 10. On postinges […]

Thyroid storm (thyroid crisis) is a rare and serious complication of thyrotoxicosis with a significant mortality rate if left untreated. Early recognition of the syndrome with a thorough history and physical examination is therefore essential. The exact mechanism for this decompensation is unknown; however, many physiologic stressors can precipitate the crisis. This report describes an unusual case of a previously unrecognized thyrotoxicosis deve […]