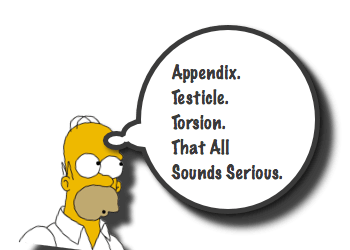 Acute scrotal pain will always grab both patient’s and providers’ attention, appropriately.  We have already discussed the most feared cause of acute scrotal pain – Testicular Torsion. While there are many other causes of inguinal and scrotal pain (ex, varicocele, inguinal hernia), one of the common causes is Torsion of the Appendix Testis.

Appendix Testis: What is that?

Appendix Testis: Don’t Get it Twisted

The most common cause of acute scrotum in prepubertal boys is torsion of the testicular or epididymal appendages. The purpose of this retrospective study was to characterize the features of these lesions as viewed on sonographic (US) and color Doppler US examination. […]

To identify the signs that can help to differentiate torsion of the appendix testis (AT) and epididymitis and to establish the incidence of the various pathologic entities in boys with an acute scrotum. […]

The aim of the study was to compare historical features, physical examination findings, and testicular color Doppler ultrasound in pediatric patients with epididymitis compared to testicular torsion and torsion of the appendix testes. A retrospective review of the medical records of 66 boys presenting with clinical aspects of acute scrotum over a 3-year period was performed. Sixty-six patients were included in the study (29 with epididymitis, 8 w […]

Torsion of the testicular appendix is the commonest cause of acute scrotum in children. The histological picture of these cases is variable and many show a heavy acute inflammatory cell infiltrate, unlike the response to pure ischaemic necrosis in other organs. The clinical implications and consequences of this associated inflammation are not clear. […]

The exact etiology of acute gonadal inflamation (EO) in children is unknown. Bacterial infection and underlying urological abnormalities are thought to be the main causes, and hence antibiotic treatment and further invasive urinary tract imaging studies are usually recommended. The purpose of this study was to assess the role of bacterial infection in pediatric acute EO. […]

The purpose of this study was to compare the size, shape, echogenicity, and blood flow of the appendix testis on sonography in control subjects and in patients with a torsed appendix testis and to evaluate the usefulness as well as the limitations of these criteria. […]