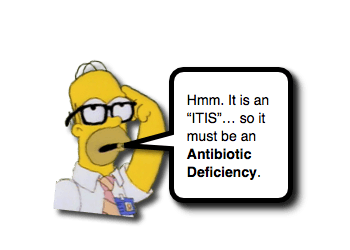 One of the great aspects of working in my ED is being surrounded by a multitude of amazing and brilliant teammates. One, Dr. Christyn Magill, recently provoked this Morsel of knowledge: just because it ends in “-itis” does not mean it needs antibiotics! Excellent point! We have covered this previously with Sinusitis, but another excellent example of this notion is Epididymitis!! Let us take a moment to review how Epididymitis in Children:

This literature review and data analysis aims to evaluate the percentage of pediatric patients with acute epididymitis found to have bacterial etiology and the percentage of patients in these studies that were treated with antibiotic therapy versus conservative therapy. […]

Acute scrotal pain in children represents a major diagnostic and therapeutic challenge. An important initial differentiation should be made between epididymitis and other processes that cause acute scrotal pain, such as testicular torsion and tumor. Infectious agents disseminating through the blood flow can damage the testis by causing orchitis. On the other hand, infections ascending via spermatic pathways typically lead to epididymitis [ 1 ]. […]

We describe patient characteristics and age distribution of epididymitis in an outpatient pediatric urology referral practice during a 21-year period. […]

Acute epididymitis is considered to have an important role in children with scrotal pain. Recent reports have shown that urinalysis is not helpful for the diagnosis and treatment of acute epididymitis owing to negative microbiological findings. Therefore, we analyzed clinical and laboratory characteristics to examine the diagnostic yield of urinalysis in children. […]

To determine the percentage of cases of epididymitis in pediatric patients that is of bacterial cause and to identify factors that predict a positive urine culture. […]

The aim of the study was to compare historical features, physical examination findings, and testicular color Doppler ultrasound in pediatric patients with epididymitis compared to testicular torsion and torsion of the appendix testes. A retrospective review of the medical records of 66 boys presenting with clinical aspects of acute scrotum over a 3-year period was performed. Sixty-six patients were included in the study (29 with epididymitis, 8 w […]

We studied the etiology and management of pediatric epididymitis. […]