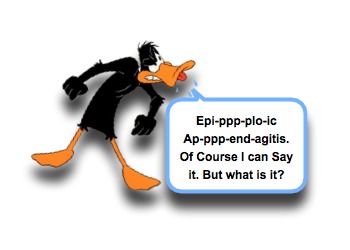 Abdominal pain is a challenging complaint. We have to discern between the critical abdominal conditions (ex, Appendicitis, Volvulus, Pancreatitis) from the less concerning causes (ex, CRAP, Constipation, Gastroenteritis). We also have to consider the causes that are not in the abdomen (ex, Strep Pharyngitis, PID, Ovarian Torsion, Pneumonia). While our clinical skills will be the most important tool we use to sort through the lengthy differential, there are times when testing/imaging may be helpful; however, with every test comes the potential for “surprises.” Let’s take a minute to review one of those possible “surprises” that may be the cause of a child’s abdominal pain- Epiploic Appendagitis:

Epiploic appendagitis, caused by inflammation of small adipose tissue on the colon wall, is a rare cause of acute abdominal pain in the pediatric population. It is nearly impossible to establish a specific diagnosis merely on the basis of clinical findings; thus, radiological evaluation is always necessary. In this report, we present the cases of three children with abdominal pain who were diagnosed with epiploic appendagitis. All cases were succ […]

Epiploic appendagitis is a rare cause of acute abdomen that often manifests with acute onset of pain in the left or right lower quadrant. Its symptoms can mimic and be mistaken for acute diverticulitis, appendicitis, or omental infarction. In this case report, we discuss a 65-year-old woman who presented with sharp right upper and lower quadrant abdominal pain, for which she had an emergent abdominal computed tomography (CT) scan. On CT images, e […]

In children, epiploic appendagitis has been seldom reported. We describe two children with clinical presentations mimicking appendicitis. A correct diagnosis was eventually achieved by magnetic resonance imaging (MRI) and confirmed at laparoscopy in the initial case. Our preliminary experience suggests that MRI is a valid and non-invasive alternative to computed tomography for characterization of unusual causes of pediatric abdominal pain in the […]

A 9-year-old boy presented with acute onset of abdominal pain and vomiting. History, physical examination, and initial laboratory testing failed to provide a diagnosis. A computed tomography scan revealed the rare finding of epiploic appendagitis. We review the literature of this rare, but increasingly recognized, condition that mimics appendicitis and needs to be considered in the child with acute abdominal pain. […]

To present our experience with contrast-enhanced ultrasound (CEUS) in patients with epiploic appendagitis (EA). […]

Epiploic appendagitis or infarction of an epiploic appendage is an uncommon cause of abdominal pain in pediatric patients. Few cases have been reported. Diagnosis based on clinical examination alone is nearly impossible, and therefore, adjunctive radiographic measures are necessary to aid in the diagnosis, including ultrasound and computed tomography. We present the case of an 8-year-old boy whose diagnosis of epiploic infarction was suggested by […]