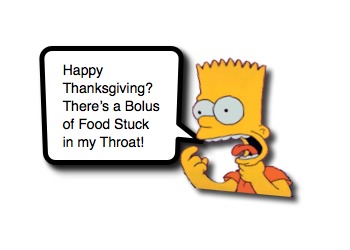 Thanksgiving is a wonderful time of the year in the USA. We take time out of our busy schedules to stop and express our true gratitude for what is more important in our lives. Oh, yes… and we overindulge and binge on food and beverage with the zeal of a new puppy tearing apart a pair of brand new leather shoes. Hmm… delicious indulgence (some may even say that is what many are truly thankful for)! Of course, all actions have risks and benefits. One hazard of such behavior is getting a bolus of food lodged in the ol’ food pipe. Of course, that is mostly an adult problem and not one we need to mention in the PedEMMorsels… right? Well, let’s take a minute to review: Food Impaction in Children!

Adult-based guidelines support the use of the pull (extraction) endoscopic technique in managing esophageal food bolus impactions (FBIs) but allow the consideration of the push (advancement) technique with caution based on available published literature. The North American Society of Pediatric Gastroenterology, Hepatology and Nutrition guidelines mention the use of gentle endoscopic pushing for disimpaction but elaborate that this technique has n […]

The aim of the study was to measure clinicopathological features of children presenting to a tertiary care emergency department with esophageal food impaction. […]