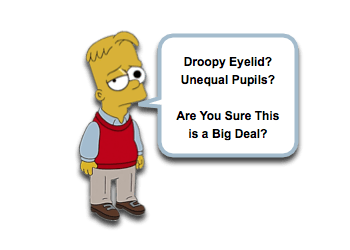 Despite what some may think, medical school wasn’t that long ago for me (stop laughing people!). I remember learning by making associations. Rash on “palms and soles” meant to think of syphilis. Horner Syndrome meant to think of a pancoast tumor. Certainly those associations can prove to be helpful later in your clinical days / daze, but are not always appropriately associated with respect to children. Let’s take a minute to make a new association for Horner Syndrome in Children:

Below are several important considerations when evaluating ptosis. [Cahill, 2015]

We report three pediatric cases of concomitant congenital Horner and Harlequin syndromes. This association suggests a lesion at the superior cervical ganglion or just inferior. Often, no underlying lesion is documented. […]

Ptosis and anisocoria in a child may be subtle indications of occult pathology, and making the observation acutely in the emergency department (ED) is important in guiding patient management and treatment. Emergency physicians must evaluate patients to exclude serious or life-threatening emergencies and ensure correct disposition of patients. Horner syndrome in children may be considered congenital or acquired and may be from benign or malignant […]

Iatrogenic Horner’s syndrome is a rare complication that can occur after trauma, cervical central line insertion, chest tube insertion, and rarely following adult thoracic and neck surgery, especially in high risk patients with hypertension and diabetes. The majority of cases reported in the literature describe non-iatrogenic Horner’s syndrome in adults as an unusual presentation for cervical tumours or apical lung carcinoma. In children, there a […]

Iatrogenic Horner syndrome is a rare complication of chest tube insertion, with little information available on this topic in the pediatric literature. We present a case of a 13-month-old boy with a left-sided pneumonia and an associated pleural effusion for which a chest tube was inserted. His respiratory and septic parameters improved, but he was noted to have ptosis, miosis, and anhydrosis of the left side. These resolved in the days after che […]

To evaluate the frequency of etiologies of Horner syndrome in children and suggest an imaging and laboratory diagnostic protocol to evaluate for neuroblastoma and other lesions in a child presenting with Horner syndrome and no known cause. […]

The purpose of this study was to define the etiologies of Horner syndrome in the pediatric population. […]