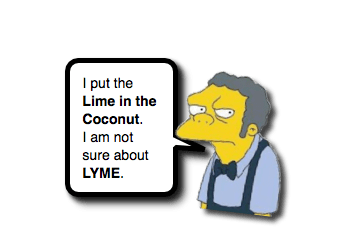 Infections and children seem to go hand in hand (seriously, their little hands are like petri dishes!). We have covered many common infections (ex, Abscess, Pneumonia, Otitis Externa, UTI)and some unusual ones as well (ex, Rabies, Mumps, Measles). Aside form the common vectors (i.e., kids putting everything in their mouths) there are also other unique vectors to consider when dealing with infections in children, particularly in the Summer months. Tick Related infections (ex, RMSF, Tick Paralysis) are formidable foes and warrant our vigilance. Let us review another tick borne illness that is becoming more prevalent: Lyme Disease.

Lyme arthritis (LA) of the hip can present similarly to septic arthritis (SA) and transient synovitis (TS). The primary purpose of this study was to determine clinical and laboratory parameters differentiating LA of the hip from SA or TS among children who had undergone hip aspiration during the evaluation of hip pain. […]

Lyme disease (LD) is the most common vector-borne illness in North America. Reported cases of LD have increased from approximately 10,000 cases annually in 1991 to >25,000 cases in 2014. Greater recognition, enhanced surveillance, and public education have contributed to the increased prevalence, as have geographic expansion and the number of infected ticks. Cases are reported primarily in the Northeastern United States, Wisconsin, and Minneso […]

Most Lyme disease cases in the Midwestern United States are reported in Minnesota and Wisconsin. In recent years, however, a widening geographic extent of Lyme disease has been noted with evidence of expansion eastwards into Michigan and neighboring states with historically low incidence rates. […]

To estimate the prevalence of Lyme infection among children presenting with acute, nontraumatic hip pain in a Lyme endemic region and to investigate predictors of Lyme disease among children with suspected transient synovitis. […]

To create a pediatric rheumatology Top 5 list as part of the American Board of Internal Medicine Foundation’s Choosing Wisely campaign. […]

Lyme disease is caused by infection with the spirochete Borrelia burgdorferi and is the most commonly reported vector-borne disease in the United States. Borrelia burgdorferi is transmitted to humans by infected Ixodes scapularis and I. pacificus ticks. Lyme disease is typically evidenced in its early stage by a characteristic rash (erythema migrans), accompanied by nonspecific symptoms (e.g., fever, malaise, fatigue, headache, myalgia, and arthr […]