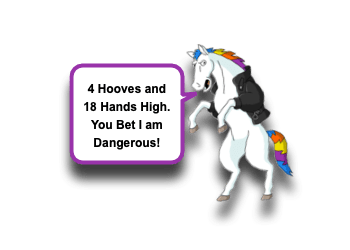 After last week’s Morsel, many of you may have felt that I was unjust in my singling out dogs and cats as potential causes of trauma in our children. While they certainly are the most prevalent inflicters of pain and suffering for our patients who have had an unfortunate encounter with the wrong end of their sharp teeth and talons, there are also other animals who can be extremely dangerous. Having grown up with (and fallen off) many horses, I can certainly vouch for the potential trauma that come with equestrian interactions. Sure, horses do not generate as much “horsepower” as a motorcycle, but 8 year olds don’t typically ride Harleys. So, in an effort to raise our awareness, let us quickly review the potential Horse Related Injuries in Children:

Even though you may not be a “horse person,” asking what the breed of the horse involved was and what activity was (ex, steeplechase, trail riding, etc) can help you determine the mechanism.

Traumatic injury to the tricuspid valve can result from severe nonpenetrating chest wall trauma. We present the case of an initially asymptomatic 11-year-old girl who was kicked in the chest by a horse. The trauma resulted in avulsed papillary muscles, ruptured chordae, and right heart failure. She underwent early tricuspid valve reconstruction and annuloplasty. We advocate for routine use of echocardiography to assess for traumatic injury to int […]

The dangers associated with horse riding, a popular activity throughout Australia, are well documented; yet, few studies have comprehensively described injuries caused by horses to nonriders. This study aimed to facilitate targeted injury prevention strategies and appropriate trauma management by describing all horse-related injuries, for both riders and nonriders, in Queensland, and identifying those at greatest risk. […]

Despite the benefit of safety vests to the reduction of torso injuries in children and adolescents is unclear, its’ use is recommended. The aim of the present study is to determine the effectiveness of safety vests actually used in pediatric equestrian activities. […]

Equestrian activities are regarded by some as high-risk sports, and our recent experience suggested this to be true. We undertook this study to review our experience with pediatric equestrian injuries. […]

This chapter reviews the current evidence for the epidemiology of pediatric equestrian injuries. […]

Ninety-six children were admitted during a 9-year period to a pediatric level 1 trauma center for treatment of farm-related injuries. The age range was from 6 weeks to 17 years (median, 7.5 years; mean, 7.6 years; standard deviation, 4.4). Thirty-nine patients (40.6%) had an animal-related injury, including 36 children (37.5%) who had an injury associated with a horse. Amish children had an increased risk of horse-related injury when compared wit […]

The aim of this study was to describe the characteristics, nature, severity and outcome of injuries from horse-related trauma in pediatric patients, aged of 19 years or younger. […]