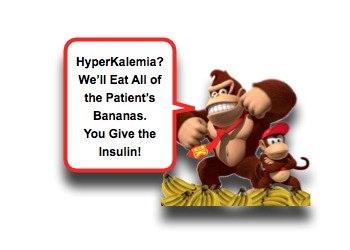 We all can take things for granted. Certainly I do all of the time: like Gravity, or that a post-menarche female will have a urinary pregnancy test done, or that the kid with altered mental status will have a finger stick glucose level. Unfortunately, when you aren’t explicit, important issues can be missed. For instance, in the past we have discussed several important conditions that can be associated with a life threatening electrolyte derangement (ex, Rhabdomyolysis, Congenital Adrenal Hyperplasia, Massive PRBC transfusion, Failure to Thrive, Hypertensive Crisis, Sinus Bradycardia), but we weren’t explicit about one of the fundamental and critical treatment plans. Let’s rectify this oversight by reviewing the management of Hyperkalemia in Children:

Hyperkalemia is a common electrolyte disorder that can result in morbidity and mortality if not managed appropriately. […]

Using a reduced dose of 5 units of regular insulin has been proposed as a strategy to mitigate the risk of hypoglycemia when treating hyperkalemia. The comparative efficacy and safety of this strategy to conventional 10 units is not well established. […]

Hyperkalemia is a frequent clinical abnormality in patients with chronic kidney disease, and it is associated with higher risk of mortality and malignant arrhythmias. Severe hyperkalemia is a medical emergency, which requires immediate therapies, followed by interventions aimed at preventing its recurrence. Current treatment paradigms for chronic hyperkalemia management are focused on eliminating predisposing factors, such as high potassium intak […]

Hyperkalemia treatment with intravenous insulin has been associated with hypoglycemia. This single-center, retrospective study compared the effects on hypoglycemia between weight-based insulin dosing (0.1 U/kg of body weight up to a maximum of 10 U) compared to standard flat doses of 10 U among patients weighing less than 95 kg. Of the 132 charts randomly selected for review, hypoglycemic events (blood glucose <70 mg/dL) were reduced from 27.3 […]

To describe the safety and efficacy of sodium polystyrene sulfonate (SPS) in pediatric patients with acute hyperkalemia. […]

Hyperkalemia in young children is a rare phenomenon and in many cases caused by hemolysis in the specimen due to difficulties in obtaining a sample. However, hyperkalemia can also be a sign of a rare Mendelian syndrome known as familial hyperkalemic hypertension or pseudohypoaldosteronism type II. This disease is characterized by hyperkalemia, hypertension, and mild hyperchloremic metabolic acidosis (with normal anion gap) despite normal glomerul […]

Hyperkalemia is one of the reversible causes of cardiac arrest in children. The Advanced Cardiovascular Life Support guidelines have specific recommendations on the choice and sequence of medications for treatment of life-threatening hyperkalemia. However, the Pediatric Advanced Life Support guidelines have no specific treatment recommendations. The objective of this study was to measure the extent to which opinions diverge among pediatricians on […]

To determine whether time to prepare IV medications for hyperkalemia varied by 1) drug, 2) patient weight, 3) calcium salt, and 4) whether these data support the Advanced Cardiac Life Support recommended sequence. […]

The aim of this study was to assess the incidence of hypoglycemia in hospitalized patients following acute treatment of hyperkalemia with insulin. A characterization of the affected patients and the administered insulin/dextrose regimens was also performed. […]

Sodium polystyrene sulfonate (SPS), an ion-exchange resin designed to bind potassium in the colon, was approved in 1958 as a treatment for hyperkalemia by the US Food and Drug Administration, 4 years before drug manufacturers were required to prove the effectiveness and safety of their drugs. In September 2009, citing reports of colonic necrosis, the Food and Drug Administration issued a warning advising against concomitant administration of sorb […]

I enjoy taking care of patients and I finding it endlessly rewarding to help train others to do the same. I trained at the Combined Emergency Medicine and Pediatrics residency program at University of Maryland, where I had the tremendous fortune of learning from world renowned educators and clinicians. Now I have the unbelievable honor of working with an unbelievably gifted group of practitioners at Carolinas Medical Center. I strive every day to inspire my residents as much as they inspire me.
Articles: 550