Once again the Ped EM Morsels will address a topic that accentuates the fact that children are not aliens to be feared, but rather a special population of humans. Yes, children can be afflicted with conditions traditionally considered in adults (ex, Pulmonary Embolism, A-Fib, and Kidney Stones), but kids will often have different risk factors and associated conditions. Another entity that fits this description I encountered just this week. Let’s take a minute to review (what I had to review) on Urinary Retention in Kids: 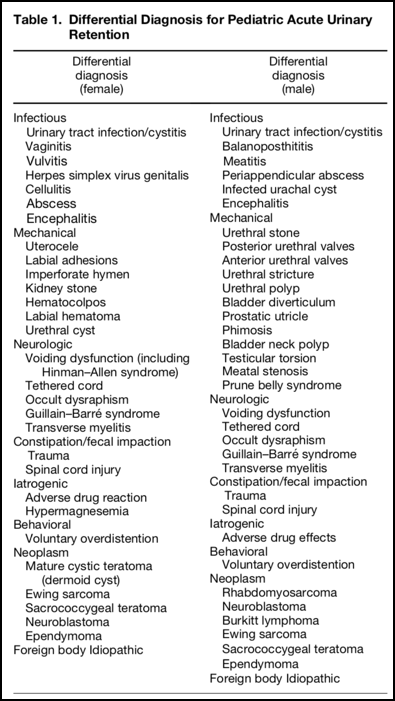 Urinary retention in an otherwise healthy adolescent is a concerning symptom, in which etiology can range from an extracystic mass to central nervous system involvement (CNS). One possibility is acute disseminated encephalomyelitis (ADEM), a rare inflammatory autoimmune disease that affects the CNS via demyelination. The disease usually is preceded by an acute viral infection, and commonly presents with multifocal neurological deficits. The diagn […]

Acute urinary retention (AUR) is a rare diagnosis both in pediatric and adult female populations, especially when compared to adult males. AUR occurs in women at a rate of 7 in 100,000 per year in a 1:13 female to male ratio. Multiple studies have shown that within the pediatric population AUR is far less common in females and is caused by different pathologies than AUR in adult women. […]

We present the case of a 12-year-old boy with acute urinary retention presumed secondary to Epstein-Barr virus infection. Workup revealed an atonic bladder, which was refractory to medical management. The patient subsequently developed axillary lymphadenopathy, and the biopsy specimen was consistent with Epstein-Barr virus. In addition to presenting this patient with acute urinary retention secondary to EBV infection, we review the causes of acut […]

Acute urinary retention is relatively infrequent in children. There are a variety of causes that are poorly defined in the literature, and they differ greatly from those seen most frequently in adults. We review our experience with pediatric patients presenting with urinary retention to 2 major metropolitan children’s hospitals. […]

Emergency physicians frequently encounter patients with acute urinary retention. Although most common among the elderly, pediatric and young adult patients occasionally may present with this complaint. The differential diagnosis and emergency department work-up must be age specific. We discuss the case of a young man who presented with acute urinary retention, subsequently found to be caused by undiagnosed appendicitis with appendiceal abscess fo […]

Acute urinary retention (AUR) is an uncommon diagnosis in childhood, associated with a variety of causes. The emergency physician is often the first to be called upon to evaluate and treat these children. To assist in making the diagnosis, we present our five-year experience with AUR presenting to the pediatric urology service, often through the pediatric emergency department. We present and discuss examples of not only the common reasons for AUR […]

A thirteen-year-old girl sought medical advice because of a markedly weakened urinary stream with severe hesitancy. She was referred to the pediatric clinic because of 3 episodes of acute urinary retention during a previous month. Pelvic examination showed a retrovesical tumor. An excretory urogram revealed bilateral ureterectasis and pyelocalicectasis. Two weeks after left nephrostomy, surgical exploration demonstrated a right ovarian mass causi […]