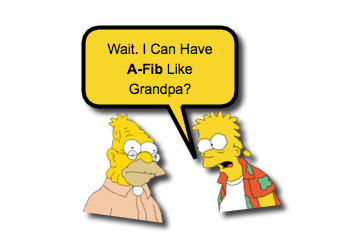 We all know that children are a special population of humans (please don’t say “kids aren’t little adults”- it engenders fear of caring for kids instead of empowering providers for staying abreast of the issues that make caring for kids unique and special – ok… I’ll get off soapbox now), but it seems like “adult problems” are becoming more recognized in children now.  We have discussed issues like Pulmonary Embolism, Cholelithiasis, Acute Cholecystitis, and Renal Stones. Here is another item to add to that list of conditions seen commonly in adults, that may make you scratch your head if/when you encountered it with one of your pediatric patients – A-Fib in Kids:

Little is known about lone atrial fibrillation (AF) in pediatrics and its risk factors due to low prevalence. We sought to determine risk factors and estimate recurrence rates in children with lone AF using a large clinical database. Using the Explorys clinical database, we retrospectively identified patients who were below 20 years of age at the time of their AF diagnosis. Patients with congenital heart disease, cardiomyopathy, prior open heart […]

Left atrial (LA) dilation has been shown to be associated with atrial fibrillation (AF) in the adult population, with some studies indicating that larger LAs are more prone to AF recurrence. The relation of LA size to AF in the pediatric and young adult population has not been investigated. In this study, all pediatric patients (aged ≤22 years) who presented to Boston Children’s Hospital from January 2002 to December 2012 with AF were reviewed […]

There are few reports of pediatric studies of atrial fibrillation (AF). We sought to describe the clinical characteristics, management strategies, and recurrence rates and to identify predictors of AF recurrence in a contemporary pediatric population. […]

To determine if pediatric patients with a history of lone atrial fibrillation (AF) have other forms of supraventricular tachycardia (SVT) that may potentially trigger AF. […]

Energy drinks and highly caffeinated drinks comprise some of the fastest growing products of the beverage industry, often targeting teenagers and young adults. Cardiac arrhythmias in children related to high caffeine consumption have not been well described in the literature. This case series describes the possible association between the consumption of highly caffeinated drinks and the subsequent development of atrial fibrillation in the adolesc […]

Atrial fibrillation is a rare diagnosis in children and adolescents. We report a case of a 17-year-old previously healthy boy who presented to the emergency department with a 3-week history of shortness of breath, chest pain, and 1 episode of hemoptysis. Symptoms persisted despite a course of antibiotics and anti-inflammatory agents. The patient developed palpitations and was found to be in atrial fibrillation at the time of hospitalization. An e […]

Atrial fibrillation is a relatively rare form of arrhythmia in the pediatric population. When it is seen in an infant or child, it is often associated with a structural heart abnormality, particularly after surgical repair or palliation of congenital heart disease. Other episodes may be associated with metabolic derangements. This report discusses the unique case of a toddler with new-onset atrial fibrillation that was devoid of a readily identif […]