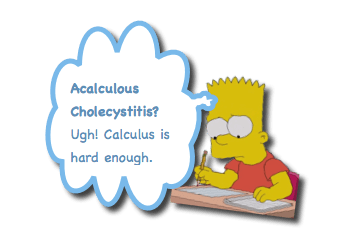 When caring for children, we are all prepared for evaluating abdominal pain as it seems like every condition leads can cause belly pain. Fortunately, this means the odds favor it not being caused by a critical condition; however, it therefore mandates that we remain vigilant for those subtle presentations of more ominous conditions. Previously, we’ve discussed important conditions to keep on our Ddx lists (ex, Pancreatitis, Cholelithiasis, Malrotation, Appendicitis, HSP, Intussusception, Ovarian Torsion, Testicular Torsion), but there is another one that we need to consider that may be easily overlooked, due to the age of the patient- Acute Cholecystitis:

Acute acalculous cholecystitis (AAC) is generally considered to be a mild disease in children; however, if left untreated or treated without caution, AAC can lead to severe outcomes, such as death. The objectives of this study were to present the clinical features and identify the predictors of mortality in pediatric AAC. […]

We hypothesize that chronic cholecystitis accounts for the majority of inflammatory diseases in the pediatric population and it is difficult to predict with preoperative ultrasound. […]

Epstein Barr Virus (EBV) is a ubiquitous herpes virus that persists lifelong in normal humans by colonizing memory B cells. Infection during childhood is usually asymptomatic. Isolated gallbladder wall thickening or hydrops have been reported in patients with EBV infectious mononucleosis. However, acute acalculous cholecystitis is an atypical clinical presentation of primary EBV infection. We present a teenager with acute cholecystitis associated […]

Acute acalculous cholecystitis (AAC) is a rare complication of Epstein Barr virus (EBV) infection, with only a few cases reported among pediatric population. This clinical condition is frequently associated with a favorable outcome and, usually, a surgical intervention is not required. We report a 16-year-old girl who presented with AAC following primary EBV infection. The diagnosis of AAC was documented by clinical and ultrasonographic examinati […]

Evaluation of the child with acute abdominal pain is challenging because of the wide range of potential diagnoses. Presenting symptoms, clinical examination, and laboratory findings can guide selection of diagnostic imaging. […]