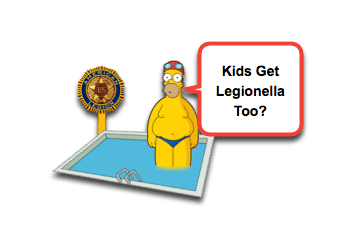 Recently we discussed Urinary Retention in Kids and highlighted how this is not a condition that only affects adults and the elderly. Obviously, there are numerous examples of conditions typically segregated in our medical school texts as affecting only adults that, in fact, are important for us to consider in children as well (ex, PID, Pancreatitis, Cholelithiasis – interesting aside, one of my PEM fellows, Dr. Mary Grady, actually diagnosed Choledocholithasis in kid 2 weeks ago). When someone says “Legionella,” I’ll be honest, I typically imagine an elderly person developing pneumonia after swimming at the local American Legion… but, I am now adjusting my perception. Let’s review Legionellosis in Children:

Legionnaire disease is a rare cause of community-acquired pneumonia in children and an exceedingly rare diagnosis in infants and neonates, with only few reported cases. We describe a case of fatal Legionnaire disease diagnosed by culture and polymerase chain reaction method from sputum and lung biopsy specimens, and emphasize the importance of considering this rare entity in cases of severe neonatal pneumonia. […]

Legionnaires’ disease is an established and frequent cause of pneumonia in adults but is thought to be a rare cause in children. We reviewed the medical literature for cases of Legionnaires’ disease in children and analysed the epidemiology, clinical characteristics, and treatment. 76 cases of legionella infection in children were identified. In 56%, diagnosis was made with culture methodology. 46% were community-acquired infections. 51.5% were u […]

Only a few cases of nosocomial Legionella sp. infection have been reported in children. We report the clinical and epidemiologic data of five nosocomial legionellosis cases that occurred in the Pediatric Nephrology Service between August, 1994, and December, 1998, and the control measures adopted. […]

Acute-phase and convalescent-phase sera of 66 children, aged 3 months to 12 years, with neurologic disorders of unknown etiology were tested against Legionella pneumophila polyvalent and monovalent antigens (groups 1 to 4). Three significant antibody titer increases were obtained, all in children with acute cerebellar ataxia. This neurologic syndrome was characterized by sudden onset of muscle hypotonia and inability to sit or walk, with no other […]

Legionnaires’ disease occurred in a 3-year-old boy with Down’s syndrome. His illness was characterized by bilateral pneumonia, high fever, and response to erythromycin. The diagnosis was made by demonstrating Legionella pneumophila, serogroup 1, in sputum with a direct fluorescent antibody stain. L pneumophila antigen was detected in urine by an enzyme-linked immunospecific assay. The diagnosis was confirmed by a more than fourfold rise in serum […]