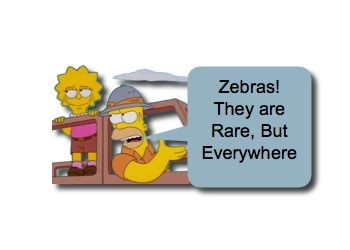 Hooven animals are complicated creatures (just like humans). They can be majestic, but rambunctious. They can be wild, yet tamed. In medicine, we often try to distinguish between them: Horses versus Zebras. While searching among the horses for the zebras, we may have in mind that the zebras are rare, which can be true on an individual basis; however, when the group you are searching through is large, the absolute number of zebras can be substantial (see Inborn Errors of Metabolism). The trick is to keep a vigilant eye open, trying to detect even the most subtle of stripes. One of those stripes that will catch your attention is ataxia. Let us take a moment to review one of the common “zebras” in children- Acute Cerebellar Ataxia:

We categorized the causes of acute ataxia in the pediatric population-referred to the Division of Neurology-at a large, urban pediatric medical center. Of the 120 cases identified over the past 11 years, post-infectious cerebellar ataxia was the most commonly diagnosed (59%), followed by drug intoxication, opsoclonus-myoclonus ataxia syndrome, episodic ataxia, acute cerebellitis, cerebellar stroke, ADEM, meningitis, cerebral vein thrombosis, Leig […]

Cerebellar involvement by infectious-inflammatory conditions is rare in children. Most patients present with acute ataxia, and are typically previously healthy, young (often preschool) children. Viral involvement is the most common cause and ranges from acute postinfectious ataxia to acute cerebellitis MR imaging plays a crucial role in the evaluation of patients suspected of harboring inflammatory-infectious involvement of the cerebellum and bra […]

Acute cerebellar ataxia is a clinical syndrome with sudden onset of uncoordinated gait and normal mental status in young children. Although it has a benign clinical course, it often requires an exhaustive diagnostic work-up in order to rule out potentially life-threatening etiologies that present similarly. The wide differential encompasses causes from infections, brain masses, drugs, toxins, trauma, paraneoplastic syndromes, as well as hereditar […]

Acute ataxia is a fairly common emergency that confronts the pediatric neurologist in daily life. The differential diagnosis of acute pediatric ataxia is wide, but informed history and careful clinical examination can narrow it and help target investigations. This review discusses various etiologies of acute pediatric ataxia, focusing on clinical presentation, diagnostic considerations, and approach to investigation. Aspects of treatment and prog […]

Acute cerebellar ataxia (ACA, sudden onset of truncal ataxia and gait disturbances) usually follows a benign illness (25% varicella). It is also described after vaccination, like MMR and varicella zoster virus (VZV). We will establish incidence rates of (varicella related) ACA and assess the attributable risk of vaccination to ACA in the Netherlands. […]

Opsoclonus-myoclonus syndrome (OMS) is a rare, autoimmune neurological disorder that is poorly recognized and undertreated. Neuroblastoma is found in one half of the cases. Because of the high incidence of spontaneous regression of neuroblastoma, it is unknown whether not finding a tumor means there was none. To define demographic trends and the standard of care in the first large series of OMS, 105 children were recruited over a 13-year period i […]