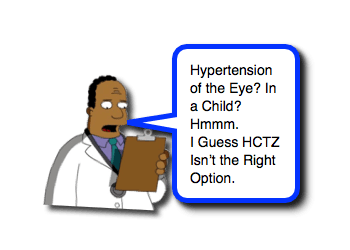 Eye complaints are commonly encountered when caring for kids in the ED. Often, they are due to a simple issue, like conjunctivitis (although even “simple” deserves vigilance – Conjunctivitis-Otitis-Syndrome), but there are other times when the “red eye” warrants greater concern. This is particularly true in the setting of trauma. We have considered some eye-related trauma before (ex, Hyphema, Eyelid Lacerations), but now let us look at another potential cause of eye pain after trauma – Traumatic Glaucoma:

Pediatric Glaucoma can be classified as Primary or Secondary.

To date, there are limited data on the economic burden of childhood glaucoma, a relatively rare but visually debilitating disease. The purpose of this study is to evaluate the immediate costs of illness associated with childhood glaucoma during the first 4 years after presentation. […]

To determine the current population-based epidemiology, treatment, use of resources and outcomes of children’s eye injuries in Finland. […]

We performed a minimally invasive trabeculotomy using a trabectome on a 9-year-old boy with a trauma-related secondary glaucoma where the intraocular pressure (IOP) could not be controlled by conservative approaches. After a 1-year follow-up the patient showed well controlled IOP values without using drugs to reduce pressure. […]

The aim of this study is to describe the type and severity of paintball-related ocular trauma and to determine the necessary precautions to minimize the risk of ocular injury regardless of whether adequate eye protection was used. […]

To determine the incidence and risk factors of secondary glaucoma after pediatric cataract surgery. […]

An updated classification of the primary and secondary childhood glaucomas is offered for clinical use, and associated systemic diseases are included to enable their early recognition in children with known glaucoma. […]

To describe the incidence and clinical characteristics of childhood glaucoma in a defined population of the United States. […]

Pediatric glaucoma is a rare, potentially blinding condition, yet, in the United Kingdom, there is a paucity of contemporary epidemiologic and clinical data regarding this condition. The British Infantile and Childhood Glaucoma (BIG) Eye Study is the first national population-based study conducted to examine the incidence, detection patterns, current management, and intraocular pressure (IOP) control at 1 year in children with newly diagnosed gla […]

To evaluate associations between baseline structural and functional ocular characteristics and the risk of developing posttraumatic glaucoma after penetrating ocular injury. […]

Glaucoma resulting from secondary congenital, ocular, or systemic conditions represents a formidable diagnostic and management challenge for optometrists. This paper discusses the pathogenesis, diagnosis, and treatment of six common forms of the disease: exfoliation syndrome, pigmentary glaucoma, neovascular glaucoma, lens-induced glaucoma, glaucoma accompanied by ocular inflammation, and trauma-induced glaucoma. For each of these conditions, cli […]