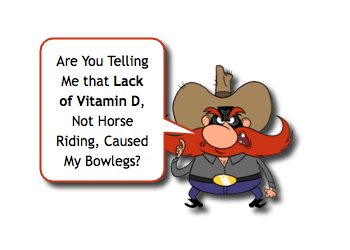 In the Emergency Department, we are constantly juggling large lists of differential diagnoses. We become facile at sorting through the vast Ddx for seizures (ex, simple febrile seizures, complex seizures, neonatal seizures, eclampsia, seizure mimics) and syncope (ex, hair grooming syncope, Brugada, prolonged QTc, breath holding spell). We also are painfully aware that even fractures deserve more attention than describing what bone is broken (ex, wrist, supracondylar, pelvic, toddler’s). Unfortunately, we have to contemplate the potential for a patient presenting because of abuse. Interestingly, there is one condition that should be added to the Ddx list of each of these scenarios – Rickets:

Rickets: Presentations in the ED

Vitamin D deficiency rickets is a childhood osteomalacia, with impaired skeletal development and potentially skeletal deformities. The radiographic findings of rickets are many but include widening, fraying, and cupping of the metaphysis. Developmental delay and related complications of seizure and tetany have also been reported. This medical entity is often thought of as a classic medical disease of the past. However, it persists, and the recogn […]

Nutritional rickets has been on the rise in the United States. A chart review of patients with nutritional rickets from April 1995 to May 2005 was performed. Fifty-eight subjects were studied (62% males, 38% females, with an age range between 2 and 132 months). Of the subjects, 81% were African Americans and 14% were Arabic; 33% were Christians and 19% were Muslims. An increasing number of cases of nutritional rickets have been noted since 2000. […]

In the emergency department, opportunities exist for the emergency physician to make a diagnosis beyond the chief complaint. For example, an astute reader of pediatric radiographs may detect signs of rickets on plain films that are obtained for other reasons. Risk factors that should suggest nutritional rickets in an infant include a history of exclusive breast-feeding, time of presentation in late winter or early spring, and a physical examinati […]

Although cases of Vitamin D-deficient Rickets have declined since the Industrial Revolution, certain populations remain at risk. Risk factors for developing vitamin D-deficient Rickets include breast-feeding without formula or vitamin supplementation, very dark skin and inadequate exposure to sunlight. We describe a case of Rickets in a breastfed infant with dark skin who presented with hypocalcemic seizures. The pathophysiology of Rickets is bri […]

Vitamin D-deficient rickets is uncommon but becoming more prevalent in the pediatric population likely related to increases in breast-feeding. It should be considered in many clinical situations. We present 3 cases of rickets presenting acutely to the emergency department. Their presentations included a fracture concerning for child abuse, tetany, and hypocalcemic seizures. In all cases, laboratory and radiographic evaluations were consistent wit […]