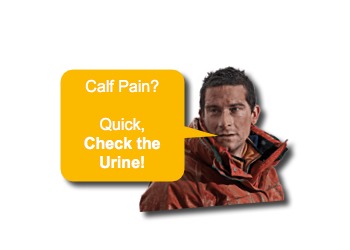 Previously, we have discussed the potential counterproductive effects of saying the phrase “It’s just a virus.” Aside from the perception that their child’s illness is “no big deal,” this phrase is also inaccurate as it implies that viral illness is not significant. Certainly, we know that viral infections can have significant negative affects on organs  (ie, Myocarditis, Pericarditis, Mumps, Guillain-Barre Syndrome, Aplastic Anemia).  Fortunately, many times viral induced illness is self-limited and does resolve without long-term consequences to any organ systems. One such condition may initially make you worry about the kidneys (Rhabdomyolysis), but typically subsides without lasting injury. Let us take a minute to familiarize ourselves with Benign Acute Childhood Myositis:

The aims of the study were to determine the evolution of benign acute childhood myositis in children and to assess the relationship between creatine phosphokinase (CPK) values and myoglobinuria. […]

Benign acute childhood myositis is a rare postviral myositis seen in school-aged children after a common upper respiratory infection (URI), most commonly caused by influenza [J Microbiol Immunol Infect 2004;37:95-98]. Predominantly seen in boys, this condition causes bilateral calf tenderness and pain with ambulation, often presenting as a refusal to bear weight. To avoid activation within the gastroc-soleus complex, the child will frequently com […]

Benign acute childhood myositis (BACM) is a rare syndrome associated with various viral infections. Bilateral calve pain may lead to inability to walk. During winter 2007/2008, we investigated a nationwide outbreak of influenza-associated BACM (IA-BACM) to identify etiologic (sub)type, describe the course of disease, and explore how well the syndrome is known among physicians. […]

To evaluate the clinical and laboratory findings of benign acute childhood myositis. […]