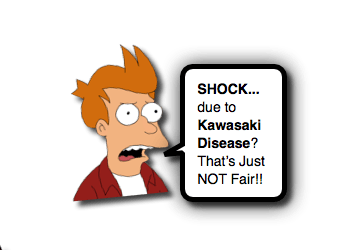 Evaluating and managing the child in SHOCK is certainly challenging. Identifying it (ex, Cap Refill, Shock Index, Lactate level) is challenging. Treating it is also challenging (see, Epi over Dopa). The challenge of determining the cause, though, should not be underestimated. While Sepsis, Trauma (Abdominal, Chest, Aortic), PE, Tamponade, Myocarditis, Heart Failure, Intussusception, Adrenal Crisis all deserve a place on the list of differential diagnoses, there is another condition to keep in mind- Kawasaki Disease Shock Syndrome:

Kawasaki shock syndrome (KSS) is a rare manifestation of Kawasaki disease (KD) characterized by systolic hypotension or clinical signs of poor perfusion. The objectives of the study are to describe the main clinical presentation, echocardiographic, and laboratory findings, as well as the treatment options and clinical outcomes of KSS patients when compared with KD patients. This is a retrospective study. All children referred to two pediatric rhe […]

Kawasaki disease (KD) shock syndrome (KDSS) is hypotension with KD. We compared children with KDSS and matched control children with KD. Children with KDSS more often were female, had a lower platelet count and sodium concentration, had a condition refractory to immunoglobulin, and had abnormal echocardiography results. KDSS is a unique subset of KD. […]

A case-control study was performed to ascertain clinical features of children who had been diagnosed as Kawasaki disease shock syndrome (KDSS), a severe condition related to Kawasaki disease (KD). Hospitalized patients were selected in Nanjing Children’s Hospital. Demographic characteristics, clinical presentation, laboratory data, cardiovascular findings, and therapies were analyzed. Compared with the control group, KDSS patients were older and […]

Kawasaki disease (KD) is a systemic vasculitis which presents with stable vital signs. Shock rarely occurs in such cases, but it may occur in the acute phase of KD. This report describes a 7-year-old boy with KD shock syndrome (KDSS) who presented with persistent fever, injected conjunctiva, a polymorphic skin rash, echocardiography indicating coronary artery dilatation, and shock. The patient’s haemodynamic status markedly improved with immunogl […]

Kawasaki disease shock syndrome (KDSS) is a severe condition related to Kawasaki disease (KD), and sometimes it is difficult to diagnose. This is a case-control study to ascertain the clinical presentations, risk factors, and clinical outcomes of children who had KDSS. […]

Kawasaki disease shock syndrome (KDSS) and toxic shock syndrome (TSS) can present as shock and fever with skin rash, but the management of these 2 groups of patients is different. This report proposes to help clinicians earlier distinguish these 2 diseases and expedite institution of appropriate therapy. […]

Severe forms of Kawasaki disease (KD) associated with shock have recently been reported in which a greater number of coronary artery abnormalities (CAA) were observed. In this study, we analyzed organ involvement not restricted to cardiovascular aspects in severe KD and assessed whether their outcome is different than in common forms. […]