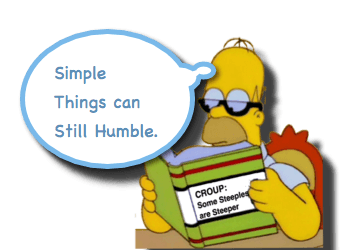 Caring for patients is very humbling. I once described the EM Mindset as being one that requires Humble Arrogance (See EMDocs.net) – requiring humility to know you can’t know it all and arrogance to believe that your skills can make a difference in another’s life.  Certainly, this requires a continual assessment of the balance between the two extremes.  Sometimes that balance is easy, but other times we don’t even recognize the disequilibrium until our patients alert us to it. Recently, a patient reminded me that, while most croup is rather benign, it can become complicated. Let us use my recent humbling experience to refresh our memories about Negative Pressure Pulmonary Edema and Croup.

Croup: What is Usual

Croup: What is Feared

To investigate the clinical characteristics and treatment of negative pressure pulmonary edema (NPPE) with upper airway obstruction (UAO) in children. […]

A 3-month-old male child underwent uneventful inguinal herniotomy under general anesthesia. After extubation, airway obstruction followed by pulmonary edema appeared for which the baby was reintubated and ventilated. The baby made a complete recovery and extubated after about 2 h. A post-operative computed tomography scan revealed a posterior mediastinal cystic mass abutting the tracheal bifurcation. Presumably, extrinsic compression by the mass […]

Negative-pressure pulmonary edema (NPPE) is a clinical entity of anaesthesiologic relevance, perioperatively caused by obstruction of the conductive airways (upper airway obstruction, UAO) due to laryngospasm in approx. 50% of the cases, its early recognition and treatment by the anaesthesist is mandatory. NPPE, also addressed as post-obstructive pulmonary edema (POPE) presents in most cases as a complex of symptoms with rapid onset, consisting o […]

Laryngospasm is an emergency situation that requires rapid identification and resolution of the obstructed glottis. Although there is a low incidence of laryngospasm, it is important to remember that any patient has the potential for post-extubation laryngospasm. Nurses must know about the causes, risk factors and treatment for this respiratory emergency. This includes the plan of care and possible medications administered to assist in restoring […]