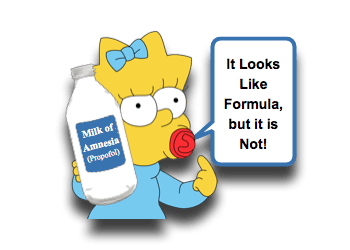 Keeping children calm and cooperative is part of our job and often leads us to using fancy medicines like Ketamine and Nitrous Oxide. Of course, it is important to have a patient safely sedated during a minor procedure like Lumbar Puncture, Facial Laceration Repair, or Incision and Drainage; however, it is even more imperative having just intubating a child. Aside from Ketamine (my favorite drug – professionally speaking), Propofol is one of the most often used tools to keep patients sedated, but our use of it in the ED can occasionally lead to some consternation amongst our friends in the PICU. The reason: concern for mortality! Let us take a minute to digest a Morsel on this important consideration- Propofol Infusion Syndrome:

Through evaluation of the case reports and case series, there appears to be several trends for Risk Factors (although, there are also outliers). [Diedrich, 2011; Okamoto, 2003]

Although the requirement of propofol in children is increasing, propofol for induction and maintenance of anesthesia below 3 years old has not been approved in Korea. This study can provide a clinical evidence to increase the range of approval. […]

This study aimed to determine if short-duration procedural sedation in children with propofol is related to an adverse metabolic stress response measured by serum lactate. Propofol infusion syndrome is associated with high-dose and long-duration infusion. It has not been studied with short-duration, outpatient propofol administration. […]

In Israel, the recommendation for the use of propofol is age limited. Furthermore, procedural sedations involving propofol must be performed only by anesthesiologists. Propofol is frequently used in the PICUs in Israel. […]

Propofol is an intravenous agent used commonly for the induction and maintenance of anesthesia, procedural, and critical care sedation in children. The mechanisms of action on the central nervous system involve interactions at various neurotransmitter receptors, especially the gamma-aminobutyric acid A receptor. Approved for use in the USA by the Food and Drug Administration in 1989, its use for induction of anesthesia in children less than 3 ye […]

The aim of this study was to determine the safety and the efficacy of paediatrician-administered propofol in children undergoing different painful procedures. […]

To evaluate the safety of deep sedation provided by pediatric intensivists for elective nonintubated esophagogastroduodenoscopy. […]

Propofol is an alkylphenol derivative named 2, 6, diisopropylphenol and is a potent intravenous short-acting hypnotic agent. It is commonly used as sedation, as well as an anesthetic agent in both pediatric and adult patient populations. There have been numerous case reports describing a constellation of findings including metabolic derangements and organ system failures known collectively as propofol infusion syndrome (PRIS). Although there is a […]

Propofol is a widely used hypnotic agent for induction and maintenance of pediatric anesthesia with a well known safety profile. Experimental in vitro studies suggest that propofol may be toxic to developing neurons. We report the cases of three infants who underwent surgery before 2 months of age for different benign pathologies. Propofol was used for induction and maintenance of anesthesia in all cases. The three patients developed convulsions […]

The objective of this study was to determine the safety profile of propofol as a deep-sedation agent in a primarily outpatient program consisting of pediatric critical care physicians and specifically trained nurses with oversight provided by anesthesiology. One hypothesis was investigated: adverse events and/or airway interventions are more likely to occur in children with an abnormal airway score. […]

Over the past two decades numerous reports have described the development of a propofol-related infusion syndrome (PRIS) in critically ill adult and pediatric patients who received continuous infusion propofol for anesthesia or sedation. The syndrome is generally characterized by progressive metabolic acidosis, hemodynamic instability and bradyarrhythmias that are refractory to aggressive pharmacological treatments. PRIS may occur with or without […]

Wheeler DS1, Vaux KK, Ponaman ML, Poss BW. The safe and effective use of propofol sedation in children undergoing diagnostic and therapeutic procedures: experience in a pediatric ICU and a review of the literature. Pediatr Emerg Care. 2003 Dec;19(6):385-92. PMID: 14676486. [PubMed] [Read by QxMD]

To describe our experience using propofol sedation to facilitate elective diagnostic and therapeutic procedures, and to document the safety profile of propofol in this setting. […]