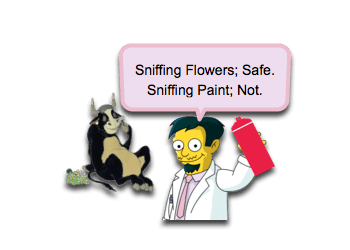 Substance abuse is not only an adult patient problem. Alcohol and illegal drug abuse, unfortunately, also afflicts our pediatric population too. While many of us are accustomed to dealing with the ramifications of such substance abuse in our patients, teenagers are also a creative bunch (ex, Loperamide Abuse) and can find a variety of other legal substances to use in an effort to alter their sense of reality. While obtaining volatile hydrocarbons may be easy and legal, it can lead to significant health hazards. Let’s take a moment to review the Huffing of Hydrocarbons and Inhalant Abuse:

Sudden deaths attributed to sniffing trichloroethylene are caused by the abuse of this solvent which produces pleasant inebriating effects with rapid dissipation. In the event of repeated cycles of inhalation, a dangerous and uncontrolled systemic accumulation of trichloroethylene may occur, followed by central nervous system depression, coma and lethal cardiorespiratory arrest. Sometimes death occurs outside the hospital environment, without med […]

Clinical effects of hydrocarbon exposure have been reported since 1897. These substances are ubiquitous, and their exposures are common. The specific hydrocarbon and route of exposure will determine the clinical effect, and an understanding of this is helpful in the care of the hydrocarbon-exposed patient. […]

Inhalant abuse is a prevalent and often overlooked form of substance abuse in adolescents. Survey results consistently show that nearly 20 percent of children in middle school and high school have experimented with inhaled substances. The method of delivery is inhalation of a solvent from its container, a soaked rag, or a bag. Solvents include almost any household cleaning agent or propellant, paint thinner, glue, and lighter fluid. Inhalant abus […]

Resuscitation from cardiac arrest caused by volatile substance abuse is rarely successful. Large doses of catecholamines given during resuscitation, in the presence of butane, may cause recurrent ventricular fibrillation. We report a case of prolonged resuscitation in a young man who had inhaled butane. Cardiac output was restored 10 min after the administration of intravenous amiodarone. We suggest that antiarrhythmic agents should be used early […]

There is an alarming increase in the number of children and adolescents inhaling chemicals for euphoric purposes. This trend merits serious concern, as abuse of inhalants can cause cardiac arrest, asphyxiation, and accidents. Substances such as gas, butane, and lighter fluid are highly toxic and destroy organs, and in some cases, inhalants have caused death on the first use. Pediatric nurses are in a key position to identify abusers and educate p […]

Acute poisoning with organic solvents and other volatile compounds now usually follows deliberate inhalation (volatile substance abuse) or ingestion of these compounds. Solvents from adhesives, typewriter correction and dry cleaning fluids, cigarette lighter refills (butane) and aerosol propellants are commonly abused. The major risk is that of sudden death. Arrhythmias leading to cardiac arrest are thought to cause most deaths, but anoxia, respi […]

The Authors describe the case history of a child who suffered a cardiac arrest with ventricular fibrillation after deliberate inhalation of 1,1,1-Trichloroethane in typewriter correction fluid thinners. Successful out-of-hospital defibrillation was carried out and the patient made a full recovery. The literature relating to this particular form of volatile substance abuse is reviewed. […]

Substances that are inhaled for the purpose of recreational self-intoxication include aliphatic hydrocarbons, alkyl halides, alkyl nitrites, aromatic hydrocarbons, ethers, and ketones. All have the ability to cause asphyxia, arrhythmias, cardiovascular depression, neurologic dysfunction, and mucosal, pulmonary, and skin irritation following acute exposure and permanent neurologic damage with chronic exposure. The acute effects of alkyl halides an […]