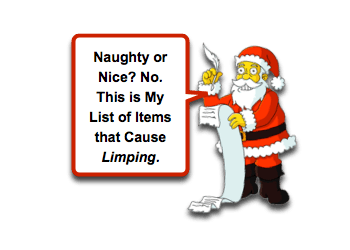 The “limping child” is commonly encountered in the ED, and while we may consider the common entities like Osgood Schlatter’s Disease, the potential issues that lead to a child limping are vast. Certainly we concern ourselves with weighing Toxic Synovitis versus Septic Arthritis. Some kids would be at risk for osteomyelitis, while others may be suffering from Legg-Calve-Perthes Disease. Obviously, we cannot forget fractures (ex, Toddler’s Fracture) or SCFE… while also considering issues “outside” of the leg – Appendicitis, PID, Epididymitis, Ovarian Torsion, Testicular Torsion, or Acute Cerebellar Ataxia. After an extensive review of your Ddx list, you may be inclined to call it “Growing Pains,” but before you do, consider avascular necrosis in the foot… and Kohler’s Disease:

We present a pediatric case report of foot pain due to Kohler’s disease. […]

With an increase in involvement in sports activities by children and adolescents, there has been a concomitant increase in both acute and overuse injuries. The pediatric skeleton lends itself to injuries unique to the young athlete, including various apophysites and osteochondroses. It is important for primary care and sports physicians treating the athlete to be aware of normal and abnormal variations in the pediatric skeleton, as well as common […]

Osteonecrosis, also referred to as avascular necrosis, refers to the death of cells within bone caused by a lack of circulation. It has been documented in bones throughout the body. In the foot, osteonecrosis is most commonly seen in the talus, the first and second metatarsals, and the navicular. Although uncommon, osteonecrosis has been documented in almost every bone of the foot and therefore should be considered in the differential diagnosis w […]

Foot problems in children can be the result of infection, trauma or overuse. Ingrown toenails, bunions, sesamoid disease, congenital overriding of the fifth toe, and fractures may occur in both adults and children. Some disorders, such as Freiberg’s infarction and Kohler’s disease, however, are unique to the pediatric population. The potential for adverse sequelae is greater in children than in adults. A thorough understanding of the anatomy of t […]