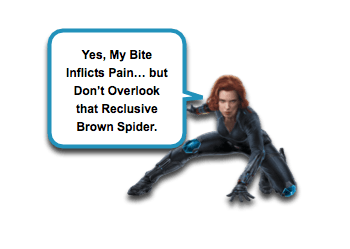 Children are curious creatures. Yes, they are perplexing (well, at least my kids are), but they are also interested in exploring their environments. This curiosity can place them in harms way at times… and then they come to see you in the ED. At times, these environmental hazards are human-made (ex, Firearms, Laundry Detergent Pods, Button Batteries, Fish hooks, Liquid Nicotine, Trampolines) and other times they are related to Mother Nature (ex, Cold Exposure, Vehicular Heat Exposure, Submersions). Still, it is often the creepy crawling pests that grab people’s attention (ex, RMSF, Lyme, Lice, Scabies). Certainly, the Black Widow has gained much notoriety (both the Marvels version and the arachnid), but let us not forget the shier spider, which can cause problems for our little patients. Let’s take a minute to review the Brown Recluse Envenomations:

Children are frequently victims of terrestrial animal and insect bites and stings. While the majority of these bites or stings are nondangerous, pediatric patients occasionally encounter a venomous animal. In such cases, children may present to the emergency department for evaluation and management. This review presents the basic epidemiology of bites and stings of spiders, bees and wasps, fire ants, scorpions, and snakes, but it primarily focuse […]

Brown recluse spider bites may cause severe local and systemic morbidity, but data regarding morbidity in children are limited. This study reviewed inpatient medical records (n = 26; 10 years) with a discharge diagnosis of “spider bite” from a tertiary pediatric hospital. The majority (85%) of children had an inflammatory response accompanying necrosis, usually with signs of secondary cellulitis (77%). Hemolytic anemia (50%), rhabdomyolysis (27%) […]